Embryo grading is a topic that has seen its fair share of debate over the years. Each IVF lab may have a slightly different way of grading an embryo. For the most part, however, they are all noting the same features, which are: inner cell mass, trophectoderm, and degree of expansion.

Features of an Embryo
Let’s start out by first defining some terms you might hear your favorite embryologists throwing around when talking about your embryo grades.
Morphology: Just a fancy word for describing the structure of the embryo.
Morula: After the embryo has done a few rounds of cell division, the cells will compact together in preparation of forming the blastocyst.
Compaction means that the cells start to communicate with each other, and cell borders can no longer be defined. This stage usually occurs around late day 3 to day 4 of culture (see Figure 1, day 4.)
Blastocyst: This is the stage of development usually observed on days 5 and 6 of culture (See Figure 1, day 5, and Figure 4.) It’s characterized by the presence of an inner cell mass, trophectoderm and blastocoel cavity. Often referred as a “blast.”
Inner Cell Mass: Commonly referred to as the “ICM.” This is the little cluster of cells on the interior of the blastocyst that develop into the actual fetus (see Figure 4.)
Trophectoderm: These are the cells that surround the outside of the blastocyst. They play a role in implantation and eventually become the placenta (see Figure 4.) 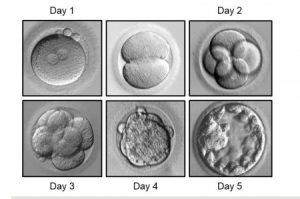 Initial Assessment
The first time you will receive a call from one of our embryologists is for your fertilization report. This will be the day after your egg retrieval. There isn’t much assessment that can be done on embryo quality at this point. We know it’s tough to play the waiting game, but it’s crucial to maintain a stable environment for your little embryos, so we limit the number of times we take them out of the incubator for assessment. During the next few days, any fragmentation will be noted. Fragmentation in human embryos is a common occurrence, and many beautiful babies have resulted from embryos that presented with fragments. Fragmentation results from uneven cell division, in which parts of the cell break off. It can be thought of as crumbs when a piece of bread is broken apart.

Day 5 Blastocysts
The next time your embryos will be looked at is on day 5. Until day 3, the majority of what drives embryo development comes from factors within the egg. After day 3 the embryonic DNA takes over, including the genetic contribution from the sperm. This is why we see most embryos drop-off after day 3, as the genetics of the entire embryo kick in.

When grading a blastocyst, the embryologist is looking at the degree of expansion, the inner cell mass, and the trophectoderm (see Figures 3 and 4.) The best grade embryo will be one that demonstrates large expansion, a plethora of uniformly-sized cells in the trophectoderm, and a “fat” (phat?) looking ICM that has many cells that are tightly packed together. Now, since this is biology there are many variations that embryos will have in these 3 areas. This also causes for a little bit of subjectivity in embryo grading. Figure 3 shows the stages of blast expansion.

Each embryo is given 2 letter grades along with a description of the level of expansion. The letter grades are a simple A, B, or C, with A being the best. The first letter grade corresponds to the ICM and the second to the trophectoderm. For example, an embryo may receive the grade “AB.”. A great ICM with a grade A, and a good trophectoderm with a grade B. It’s important to remember that with such a simple letter grading system there is room for a lot of variation.

Freezing
At Utah Fertility Center, we only freeze embryos that we believe stand a chance at resulting in a successful pregnancy. So, don’t be discouraged if you see a frozen embryo with a grade of “BC.” This just means the trophectoderm looked of lower quality, but still has a shot. You do not need a perfect AA embryo to get pregnant. The vast majority of embryos we see, and that result in a baby on the ground, come from grade BB and BC embryos. While at times it’s fun to joke about, an embryo grade is only indicative of it’s potential to implant and has no connection to how cute/intelligent/successful your baby will be. 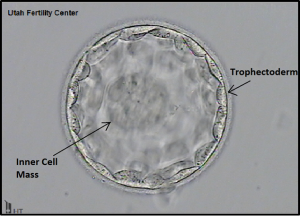 Figure 4. This is a textbook grade AA expanded blast. Remember: this is not what we always see on day 5 and you
DO NOT need this perfect of an embryo to have a perfect baby. This was simply used as a reference point. 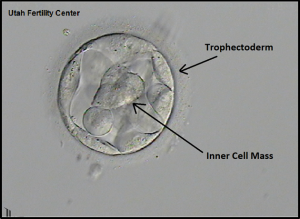 Figure 5. This would be a poor grade blast. This would be classified as an expanding blast grade CC.
This is for a reference point on the opposite end of the spectrum from figure 4.