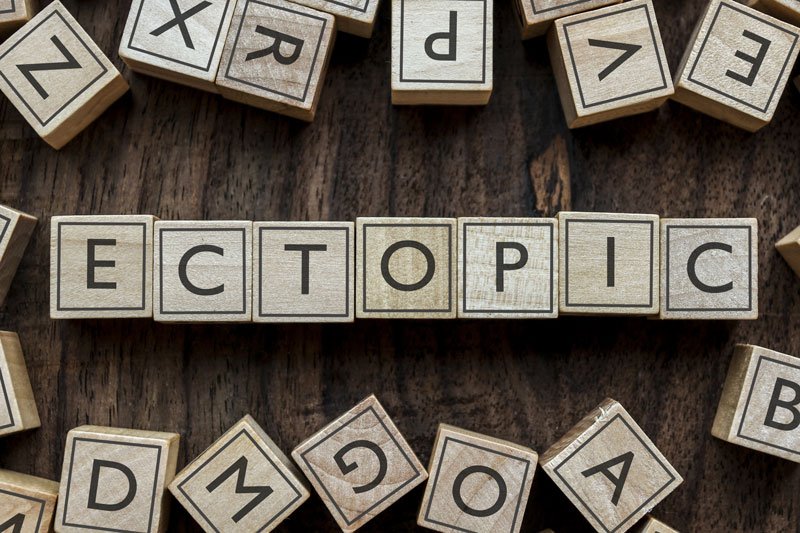 Occurrence:
An ectopic pregnancy occurs when a fertilized egg implants somewhere other than the normal uterine cavity. About 2% of pregnancies are found to be ectopic. An ectopic pregnancy most often (98% of the time) occurs in one of the fallopian tubes. This type is called a tubal pregnancy. Less commonly, an ectopic pregnancy may occur in the abdominal cavity, on the ovary, in the cervix, in the junction between the uterus and tubes (a “cornual” or “interstitial” ectopic) or in a uterine scar from a previous Cesarean Section.

Initially an ectopic pregnancy may not cause any symptoms. Early signs and symptoms of an might also be the same as those of any pregnancy — a missed period, breast tenderness or nausea. A pregnancy test will be positive just like a normal pregnancy. The first warning signs are often vaginal bleeding and pelvic pain. If the tube ruptures, internal bleeding may cause lightheadedness, fainting and shock. Emergency intervention is likely required. Ectopic pregnancies cannot develop normally. The embryo cannot survive, and it cannot be transplanted. Left untreated, damage to a woman’s internal organs and life-threatening blood loss is possible. Early diagnosis and treatment can help preserve the chance for future healthy pregnancies. Treatment may be medical or surgical (or sometimes both) depending on the situation.

If you are at increased risk of ectopic pregnancy, early monitoring and ultrasound to confirm a normal intrauterine pregnancy is likely indicated. Discussing concerns with your physician prior to pregnancy (a “preconception” consultation) will allow for a thoughtful plan as to the management of early pregnancy once pregnancy occurs. If you are pregnant and develop symptoms such as vaginal bleeding or pain, early evaluation is best to exclude the possibility of a life-threatening emergency.