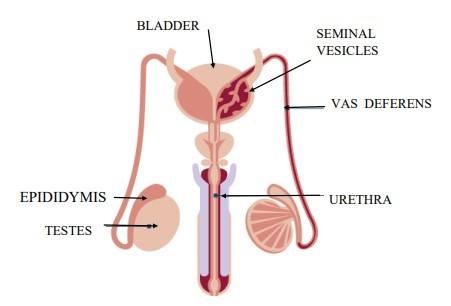 Unlike the female, whose reproductive organs are located entirely within the pelvis, the male has reproductive organs both inside and outside the pelvis. These include the testicles, the duct system (epididymis and the vas deferens), the accessory glands (seminal vesicles and prostate gland), and the penis.

A male who has reached puberty will produce millions of sperm cells every day. Each sperm is extremely small: only 1/600 of an inch (0.05 millimeters long). Sperm develop in the testes within a system of tiny tubes called the seminiferous tubules. The sperm use their tails to push themselves into the epididymis, where they complete their development. It takes sperm about 4 to 6 weeks to travel through the epididymis, becoming fully mature, motile sperm. They are stored there until ejaculation.

The seminal vesicles and prostate gland produce a whitish fluid called seminal fluid, which mixes with sperm to form semen when ejaculating. The sperm then travel through the vas deferens, or sperm duct. Semen is pushed out of the male’s body through the urethra — this process is called ejaculation and can contain up to 500 million sperm.

When the male ejaculates during intercourse, semen is deposited into his partner’s vagina. From the vagina, the sperm make their way up through the cervix and uterus, with help from uterine contractions. If the female partner has recently ovulated and there is a mature egg traveling through one of the fallopian tubes, it has the opportunity to be fertilized by a sperm, resulting in a conception.

If you have any question on the male reproductive system or would like to make an appointment with one of our highly qualified Reproductive Endocrinologists in St. George, Murray, Ogden, Park City and Pleasant Grove, Utah, please do not hesitate to contact Utah Fertility Center at 801-785-5100.